Seriation and the kayiwa-yo_bj vortex

After my last post about #c4l13 tweets I got a couple of tweets from Hadley Wickham pointing me at the R package seriation: it "will make it much easier to see clusters," he said. If Hadley Wickham recommended it I had to check it out.

I installed it in R:

Then I read the documentation. Like a lot of R documentation for it looks rather forbidding and cryptic at the start (to me, at least), but all R documentation includes examples, and once you find the right thing to copy and paste and then fiddle with, you're on your way.

I tried the example code, which uses the iris data set that's built into R. 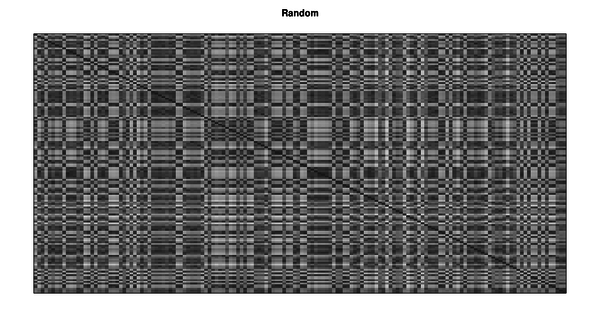 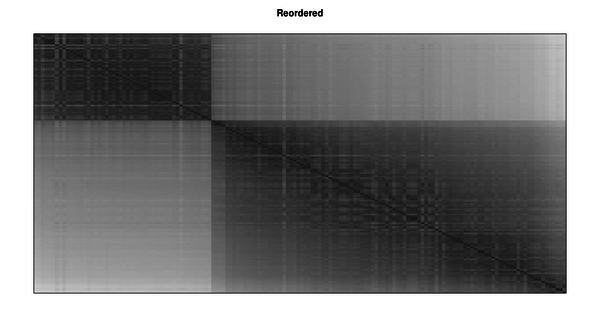 Aha! Something interesting is going on there.

One of the other parts of the documentation is a Townships data set: "This data set was used to illustrate that the conciseness of presentation can be improved by seriating the rows and columns." Let's try the example code, just copying and pasting: 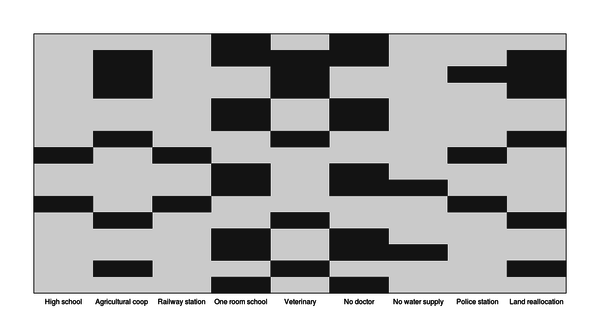 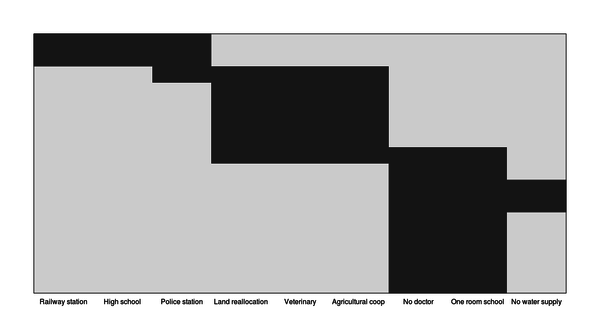 Hot diggity! If I could use this package to improve the stuff I did last time, fantastic.

I'm going to skip over two or three hours of fiddling with things and not understanding what was going on. Crucial to all of what comes next, especially in getting it to work with the ggplot2 package, is this gist of an example of seriation, which I found in a Google search. As often happens my first attempt to get things working failed, so I created a very minimal example and went through the steps many times until it worked. I'm not sure what the problem was any more---probably something to do with not referring to a column of data properly---but once it worked, it was easy to apply the steps to the full data set.

That full data set is online, so you can copy and paste what follows and it should work. If you haven't installed the ggplot2, plyr and reshape2 packages (all created by Hadley Wickham, apparently an inexhaustible superhuman repository of Rness), you'll need to. Skip the first three lines if you have, but either way you'll need to load them in.

This mentions data frame is what we'll be working with. It's 2,201 lines long and tells how many times anyone using the #c4l13 hashtag mentioned anyone else. 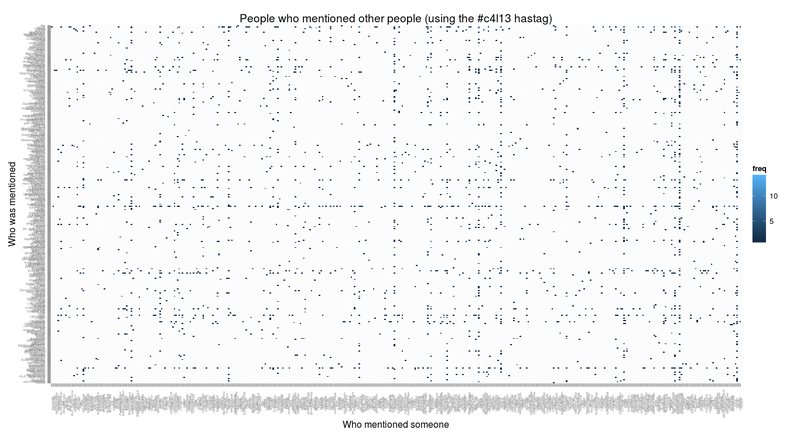 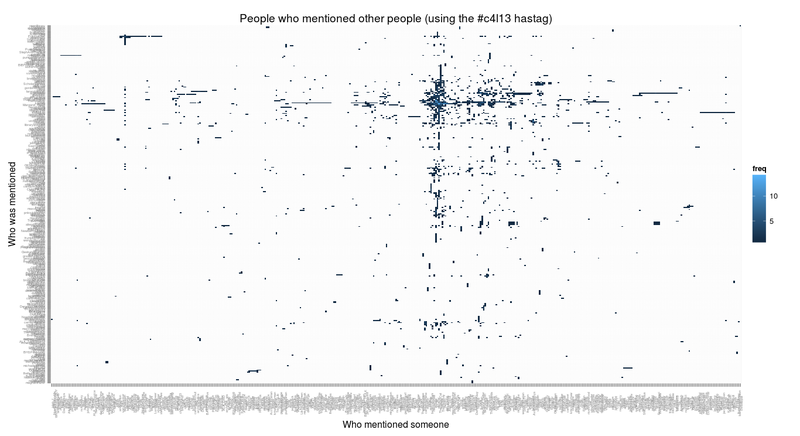 The acast command turns the three-column mentions data frame into a 433x339 matrix, with tweeter names as rows and mentioned names as columns. The value of the matrix at each cell is how many times the mentioned person was mentioned by the tweeter. We know what 3windmills mentioned yo_bj once, so there's a 1 at that spot in the matrix. We need this matrix to feed into the seriate command, which creates a special object:

We can poke into it a bit by working through the commands used above:

This is a list of names ordered in a way that seriate has determined will make an optimal ordering. We force our data frame to use this ordering, and then we get the nicer chart.

All right, that's pretty fine, but that's a lot of people and a lot of stuff going on. What if we dig into it a bit and simply things? What if we pick a user and analyze the nexus of tweeting action around them? Let's start with a boring example: me. 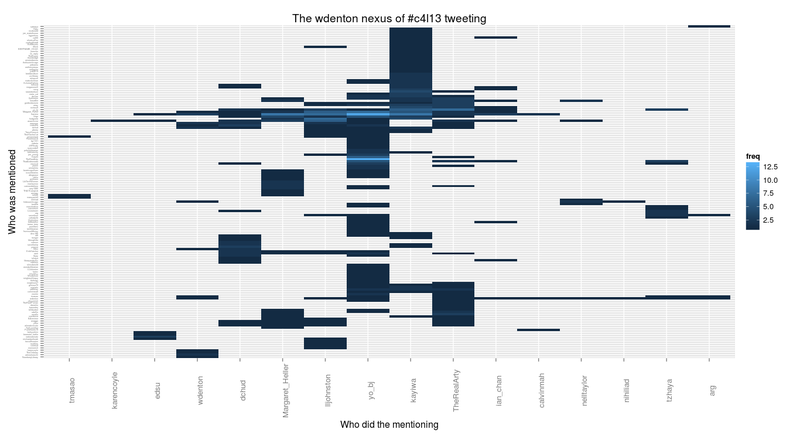 What's going on here? First we pick out every instance where I either mention someone or someone mentions me.

Then we expanded that to a tweet nexus (this is like superduping) by saying: for every person that I mentioned or mentioned me, find everyone who mentioned them or they mentioned.

Then we just did the same as we'd done before to seriate it and make a chart.

Let's see what happens if we look at yo_bj herself. 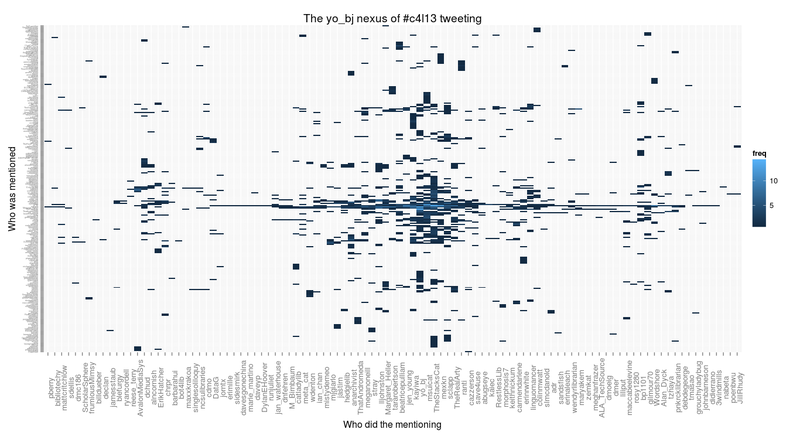 Fewer people who did the mentioning, but a lot of people getting mentioned, and roughly the same kind of shape as we saw before.

I did this a few more times on different people, then I realized that I was just repeating myself: I was running the same commands over and over, just starting with a different username. When that happens, you need to automate things. So I made a function. 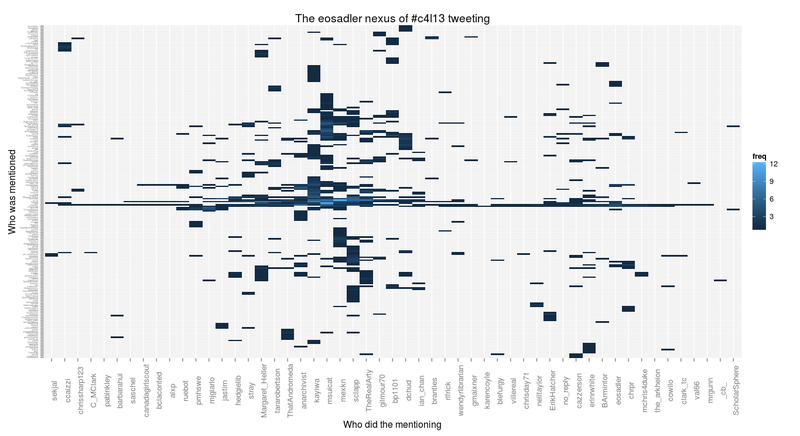 That's the tweet nexus around Bess Sadler, whose talk Creating a Commons was a highlight of conference. (More about that and a couple of other talks soon, I hope.) You can see the kayiwa-yo_bj vortex.

Aaron Swartz was missed by us all. You can see the vortex around him, too. 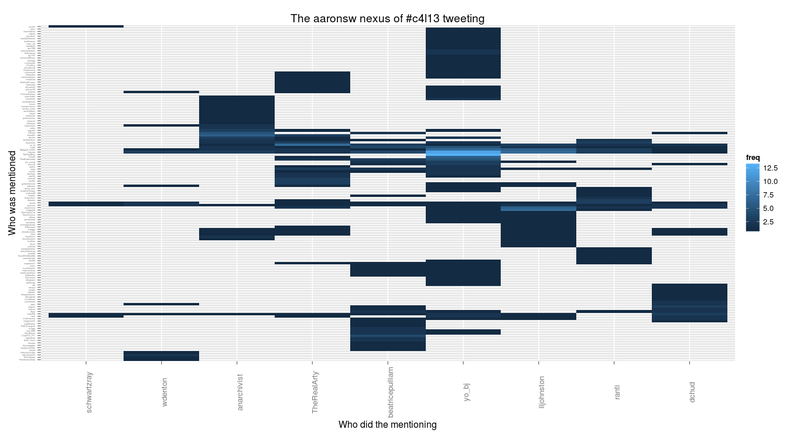 Ed Summers wasn't there, but he was watching the video stream and chatting in IRC and on Twitter: 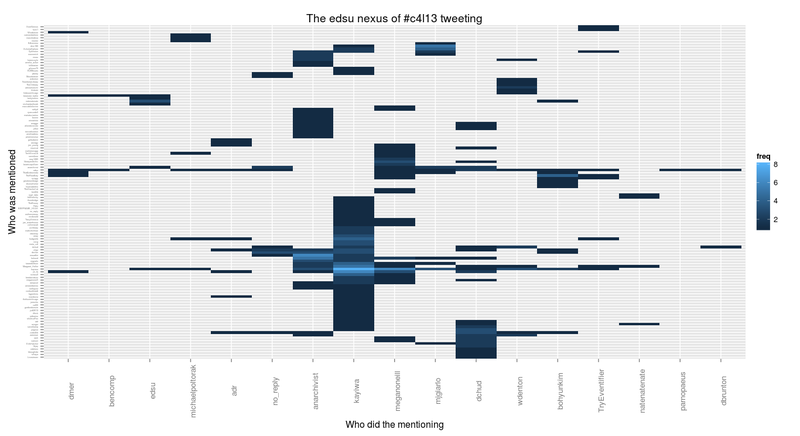 yo_bj doesn't show there in the mentioners on the x-axis, which surprised me. The kayiwa part of the vortex is evident, though.

Brewster Kahle was mentioned a few times in discussions relating to the Open Library. No vortex here, but you can see edsu tweeting at him a few times. 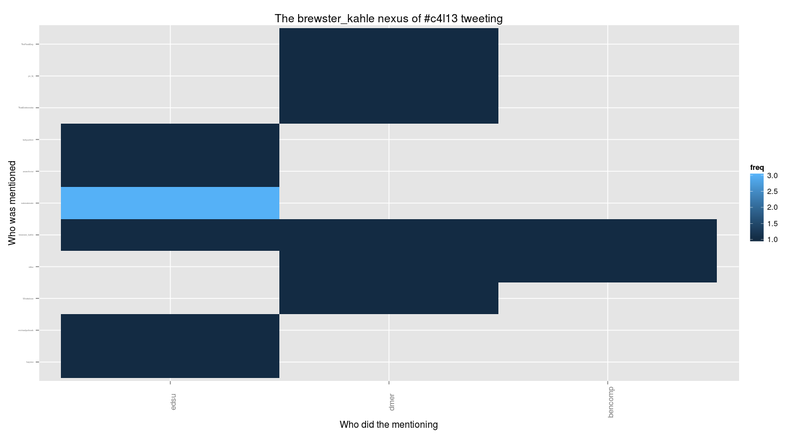 Having done all this, two things strike me: first that I should try Shiny for this, and second that some sort of graph would probably be a better representation of the connections between people. Still, I learned a lot, the charts are cool, and I coined the ridiculous phrase "the kayiwa-yo_bj vortex."