← Seriation and the kayiwa-yo_bj vortex #c4l13 tweets in R →

I had an idea for one more thing to look at in the #c4l13 tweets: instead of seeing who retweeted whom, how about who mentioned whom?

To do this I use a little Ruby script to make my life simpler. I could have done this all in R, but it was starting to get messy (I'm no R expert) and I could see right away how to do it in Ruby, so I did it that way.

In that big CSV file we downloaded of all the tweets, there's one column called entities_str that is a chunk of JSON that holds what we want. Twitter has parsed each tweet and figured out some things about it, including who is mentioned in the tweet. This means we don't have to do any pattern matching, but we do need to parse some JSON. That's why I used Ruby.

I saved this as mentioned.rb and then ran this at the command line:

Perfect. Now let's get this into R and use geom_tile again. We'll read it into a data frame and then use count to see who's mentioned who how much:

That's just the first few mentions, but we've got what we want. Now let's make a big huge chart. 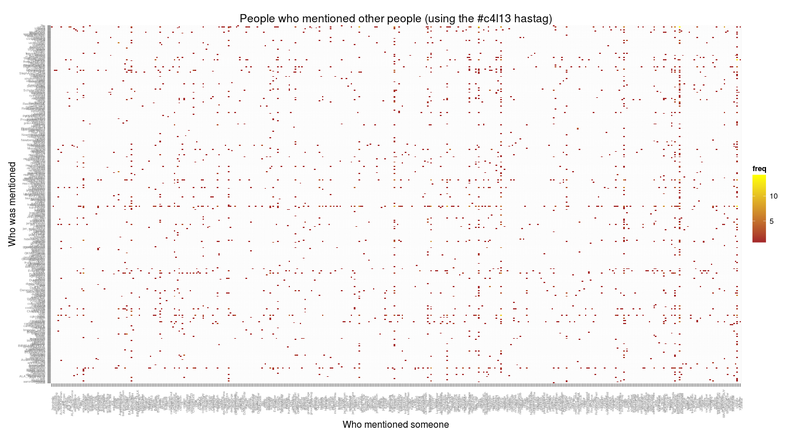 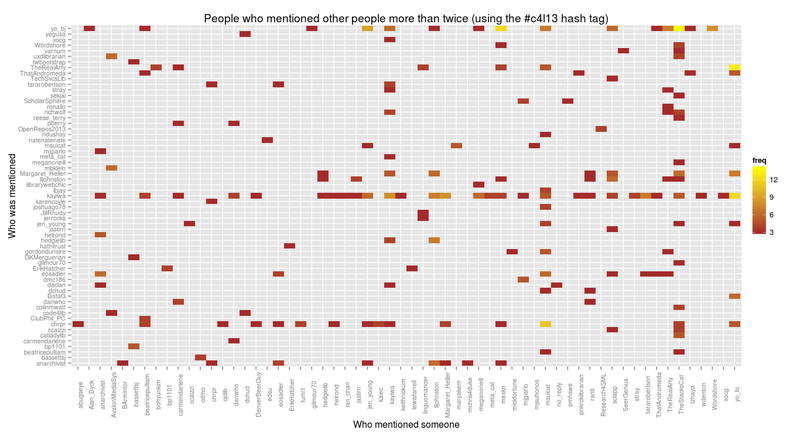 Now it's easier to see that kayiwa was mentioned by a lot of people, and going vertically, among others TheStacksCat mentioned a lot of different people, especially yo_bj.

And now I think I've exhausted my interest in this. Time to look at something else!

← Seriation and the kayiwa-yo_bj vortex #c4l13 tweets in R →