Anonymous July Wikipedia edits from the House of Commons

Last month I wrote about anonymous Wikipedia edits done from House of Commons IPs, following on Nick Ruest’s deployment of Ed Summers’s anon to make the @gccaedits Twitter bot. Now that July is over I was curious to look back at all of the edits made that month and see if the publicity had affected them.

When did it break?

A brief introductory timeline to when Canadians found out about all this:

So Vice ran a story on Monday and another Tuesday, and by Wednesday the story was in major papers. Nick was very busy that week talking to the media. Let’s assume that Tuesday 15 July is when the right people on Parliament Hill should have known about this.

There were 50 anonymous edits that came from four different IP numbers. (It’s impossible to find out how many House of Commons people used proper accounts to edit Wikipedia, from work or elsewhere.) I’ll run through them in numerical order and break down edits by date.

Robert Goguen is a Conservative MP. Someone added bland personal information to his short bio on 3 July over four small edits:

On 7 July, there was an ineptly worded edit about Thanh Hai Ngo, a Conservative senator, then an interesting comment on a talk page:

Those last two edits add up to the user saying:

That’s something like, “I’m starting on Wikipedia. I’m trying to familiarize myself with how it works. I don’t get everything about how it works, and my mistake in good faith. The Thanh Hai Ngo page has been deleted. Would it be possible to restore the Thanh Hai Ngo page to start over while respecting copyright? Thank you.” (Better translation welcome.)

What does that show? The Conservatives getting a newbie to go into Wikipedia?

Finally, on 24 July, two apparently properly sourced and, I admit, reasonable-looking edits that cast Goguen in a better light after his terrible gang rape comments when questioning Timea Nagy. A third edit moved some content around. This editor is adept.

All edits from this IP are pro-Conservative.

Bateman and Glover are both Conversative MPs. The Bateman edits seem to have been done by an inexperienced editor.

The Glover edits were politically motivated to hide facts about her election spending mistakes—since then a cited note has been added to the page about these very edits.

Those Glover edits were examined in detail by Patrick McGuire in Political staffers tried to delete the Senate scandal (and other bad behaviour) from Wikipedia, which says in part:

Yet another Conservative, Shelly Glover, an MP and the Minister of Canadian Heritage, had her Wikipedia page edited yesterday from the House of Commons. That edit completely removed a section called, “Request for suspension by Elections Canada,” which contained information about a request to suspend Glover as an MP for failing to file proper financial documents pertaining to her overspent campaign in 2011.

A Wikipedia user who uses the handle DrunkenMonkey restored the controversial section minutes after Glover’s staff attempted to remove it.

According to a representative of Glover who spoke to VICE: “Part of the communications responsibility of an MP’s political staff is to correct the record when false or inaccurate information is found in the public domain, in any number of ways. This could include writing letters to the editor or news releases, interacting with the media, or engaging in online communication.”

So, to Team Glover, deleting an entire section from an encyclopedia article is akin to bringing a factual correction to a newspaper editor, and having them revise their article.

Nothing from this IP number after 15 July. All edits are pro-Conservative.

An interesting history on this IP number. One of the people that uses it does useful copy editing, making good language and grammar updates (and seems to be a football fan). Another is a vandalising idiot who dislikes Conservatives. Another is pro-Conservative.

But then there was a very busy half hour for someone on 15 July. The vandalism began at about 12:45 pm and ended at 1:10 pm local time. Lunch break! It appears whoever made these edits hadn’t heard that these anonymous edits were being watched, which means either a) word had not spread; b) whoever did this was a hapless ill-intentioned buffoon; or c) whoever made these had heard, and is very cunning.

Dean Del Mastro is a conservative MP and Small Dead Animals is a conservative blog, so the vandalism came from someone in one of the other parties—though why would someone like that try to hide the location of a CSEC outpost at 12:35 pm, minutes earlier? If an anti-Conservative vandal takes the time to a sarcastic comment about Liberal prime ministers Trudeau and Chretien then it makes one suspect an NDPer.

Whoever made those changes is an idiot.

They got attention the next day in the National Post in Dean Del Mastro wants probe into mocking Wikipedia updates on him made from House of Commons computers:

A revision of the Peterborough MP’s entry on the online encyclopedia made Tuesday through a House of Commons Internet address changed his profession from “auto dealer” to “Dealer of Used Cars with Bent Frames, Perjurer.” A previous edit from the same address called him a “Used Car Dealer, formerly sold crippled mules.”

The perjury reference came a few days after Del Mastro took the stand to testify during his trial on charges his campaign overspent in the 2008 election. Del Mastro called the edits of his entry “unfortunate and hurtful.”

More politically-motivated vandalism the next day—whoever did this should have known that eyes were upon them—this time hiding bad information about a Conservative (did someone new get the IP number after overnight reboots?):

The next few days showed useful edits and one comment in a discussion about the statehood of Palestine:

Robert Goguen is a Conservative MP. Whoever had the IP on 29 July used it to make some politically-motivated edits at about 2:20 pm, and then at 3:05 pm made a new page on French Wikipedia about Thanh Hai Ngo (fr). Possibly the intervening 40 minutes were spent translating the English page? Remember that 192.197.82.153 made edits on Monday 07 July to the English page about this senator.

Very interesting history on this IP number. Most anti-Conservative edits, but also some pro-Conservative and some just good edits.

Fascinating business here. Early in the month there are three small edits made.

But then on Tuesday 22 July—exactly one week after 15 July—a most interesting thing happened. Evidently the page on Corneliu Chisu, a Conservative MP, was under semi-protection, which meant anonymous accounts couldn’t edit it. About two in the afternoon a change was made to Talk:Corneliu Chisu requesting that this text be added under the background section:

He was recently recognized for his work in strengthening the relations between Hungary and Canada by the President of Hungary who conferred upon him the Knights Cross of the Hungarian Order of Merit in 2014.

because I am the person who this page is supposed to be outlining.I want to make an addition under the biography

Corneliu Chisu, member of parliament, was editing his own Wikipedia entry! 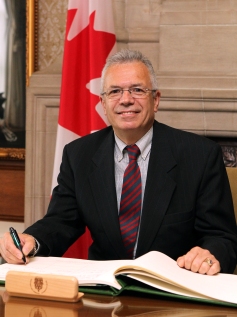 Now, one is not supposed to edit one’s own Wikipedia entry. That is frowned upon. Nevertheless, I’m rather impressed that an MP gave it a shot—though he does have a PhD in engineering and was a major in the engineering corps of the Canadian Forces, so using Wikipedia’s editor shouldn’t be a challenge (nor should proper punctuation). Good on him for giving it a shot, but next time I hope he’ll add a note to his talk page requesting someone update his entry.

And he might want to go back to using what I assume is his own account, Corneliu.chisu, which has made one contribution to Wikipedia: uploading his nice publicity shot.

Finally, a few days later there was another very minor edit:

When were these edits made?

It seems like 15 July is a good break point: before then word wasn’t widespread that the edits were being tweeted and watched; after that everyone with an interest should have known. Let’s make a chart to help see how it all looks.

Here they are broken down by IP number, with a dashed line through 15 July:

There were 20 edits made before 15 July, 12 made on 15 July, and 18 made after. There was no vandalism in the last half of the month, but still a few politically-motivated edits.

Who the hell are these people?

The Government of Canada IT department knows who had these IP numbers at these times. (We know when MP Corneliu Chisu had one of them!) Who was the idiot on 15 July? Who are the other people? I wish the good editors would set up accounts and do more editing. Good on you for your efficient rewriting and copy editing!

I predict the anonymous edits made in August will be still fewer, due to public gaze and holidays. I’ll check what’s happened when the House sits again in October.

I’m intrigued with all this business and I’ll probably poke at it some more, but I’m just a librarian sitting on my sofa writing little scripts. This needs a real journalist to find out who these vandalising idiots are and who the good Wikipedia editors are. Why isn’t someone on the Hill leaking details about this? (Someone in government IT, use one of the new secure drop methods to get a file out!) How have staffers changed their tactics now that the word is out and the tweets are tweeting? How much is being directed by parties?

How are other monitored organizations reacting? There are governments, NGOs and corporations whose anonymous edits are being tweeted (see the anon README for a lengthy list). How is behaviour changing? How can we detect how people have moved to sock puppets?

Finally, surely Corneliu Chisu isn’t the first MP to edit their own Wikipedia entry. Who else has done it?