(In the previous post, Better ways of using R on LibStats (1), I explain the background for this reference desk statistics analysis with R, and I set up the data I use. This follows on, showing another example of how I figured out how to do something more cleanly and quickly.)

Another fact we record about each reference desk interaction is its duration, which in our libstats data frame is in the time.spent column. As I explained in Ref Desk 1: LibStats these are the options:

We can use this information to estimate the total amount of time we spend working with people at the desk: it’s just a matter of multiplying the number of interactions by their duration. Except we don’t know the exact length of each duration, we only know it with some error bars: if we say an interaction took 5-10 minutes then it could have taken 5, 6, 7, 8, 9, or 10 minutes. 10 is 100% more than 5: relatively that’s a pretty big range. (Of course, mathematically it makes no sense to have a 5-10 minute range and a 10-20 minute range, because if something took exactly 10 minutes it could go in either category.)

Let’s make some generous estimates about a single number we can assign to the duration of reference desk interactions.

To do all those calculations I made a function, then a data frame of sums, then I loop through all the library branches, build up new a new data frame for each by applying the function to the sums, then put all those data frames together into a new one. Ugly! And bad!

When I went back to the problem and tackled it with dplyr I realized I’d made a mistake right off the bat back then: I shouldn’t have added up the number of “20-30 minute” durations (e.g. 10) and then multiplied by 25 to get 250 minutes total. It’s much easier to use the time.spent column in the big data frame to generate a new column of estimated durations and then add those up. For example, in each row that has a time.spent of “20-30 minutes” put 25 in the est.duration column, then later add up all those 25s. Doing it this way means only ever having to deal with vectors, and R is great at that.

Here’s the data I’m interested in. I want to have a new est.duration column with numbers in it.

I’ll do it with these two vectors and the match command, which the documentation says “returns a vector of the positions of (first) matches of its first argument in its second.” Here I set them up and show an example of using them to convert the words to an estimated number.

That’s how to do it for one line, and thanks to the way R works, if we say we want this to be done on a column, it will do the right thing.

Now with dplyr it’s easy to make a new data frame that lists, for each month, how many ref desk interactions happened and an estimate of their total duration. First I’ll take a fresh sample so I can use the est.duration column

The count column is made the same way as last time, and the minutes column uses the sum function to add up all the durations in each grouping of the data. (na.rm = TRUE removes any NA values before adding; without that R would say 5 + NA = NA.) 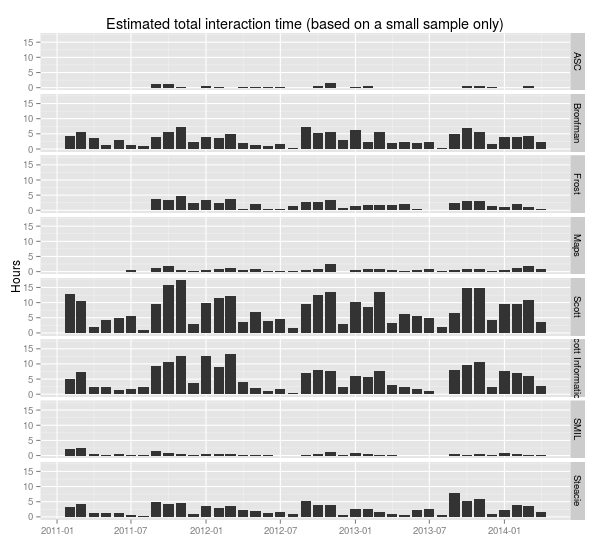 So easy compared to all the confusing stuff I was doing before.

Finally, finding the average duration is just a matter of dividing (mutate comes in dplyr): 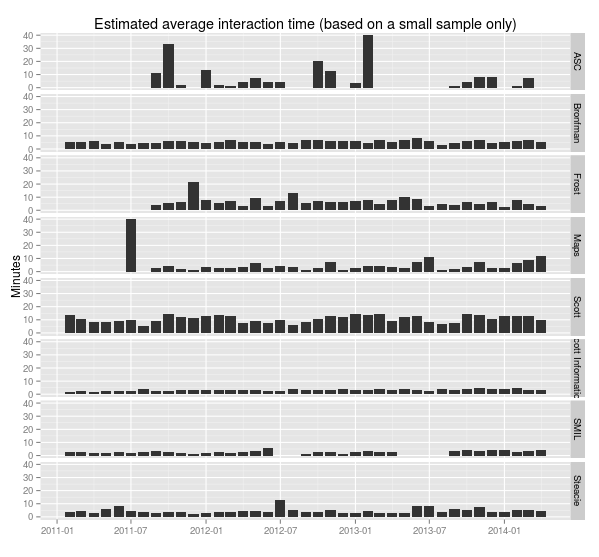 Don’t take those numbers as reflecting the actual real activity going on at YUL. It’s just a sample, and it conflates all kinds of questions, from directional (“where’s the bathroom”), which take 0-1 minutes, to specialized (generally the deep and time-consuming upper-year, grad and faculty questions, or ones requiring specialized subject knowledge), which can take hours. Include the usual warnings about data gathering, analysis, visualization, interpretation, problem(at)ization, etc.