← Westlake and Powell Zotero and Mozilla →

I recommend John Palfrey’s new book BiblioTech: Why Libraries Matter More Than Ever in the Age of Google to anyone interested in that unending question of what is the future of libraries, because he sets out a future I agree with.

Palfrey was a law professor at Harvard and lately the vice-dean of library and information services at its law library, and he helped create the Digital Public Library of America and was its first board chairman. Recently he left all that to be head of posh New England private school Andover, where he gathered his thoughts and plans about libraries and set them out in this short book. 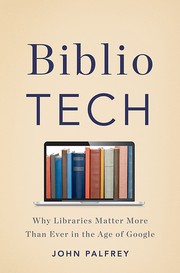 It reflects, as you’d expect, the approach of the DPLA, which is based on networked collaboration, digitization and preservation of unique resources, specialization in local material, community involvement, and open content and APIs for hackers to hack and reuse. All of this is well-argued in the book, set out clearly and logically (as law professors do), always grounded in libraries as educational institutions and librarians as educators. He knows the problems libraries (both public and academic) are having now, and sets out a way to get past them while keeping libraries both fundamental to local communities but also important at the national and international level.

I was agreeing with the book and then hit this in chapter five, “Hacking Libraries: How to Build the Future:”

The next phase of collaboration among libraries may prove to be harder. The development of digital libraries should be grounded in open platforms, with open APIs (application programming interfaces). open data, and open code at all levels. No one library will own the code, the platform, or the data that can be downloaded, “free to all.” The spirit that is needed is the hacker spirit embodied by Code4Lib, a group of volunteers associated with libraries, archives and museums who have dedicated themselves to sharing approaches, techniques and code related to the remaking of libraries for the digital era.

Damn right! The Code4Lib approach is the right approach for the future of libraries. (Well, one right approach: I agree with Palfrey’s plan, but add that on the digital side libraries need to take a leading role regarding privacy, and also need to take on climate change, with progressive approaches to labour and social issues underlying everything.)

In the next chapter he enthuses about Jessamyn West and a few others doing fresh, important, different kinds of library work. This is good to see!

Any GLAM hacker will want to read this book. I’m a bit puzzled, though: who is it aimed at? All my Code4Lib colleagues will agree with it. Non-technical librarians I know would agree with the plan, though with reservations based on worries about the future of their own areas of specialization and lack of technical skills. It will be useful when talking to library administrators. How many people outside libraries and archives will read the book? Are there more people out there interested in the future of libraries than I’d have guessed? If so, wonderful! I hope they read this and support the online, open collaboration it describes.

← Westlake and Powell Zotero and Mozilla →