← Stuff, Standards and Sites Don't give up your library card number →

I was in New York a couple of weeks ago, and I went to the Strand Bookstore, that multistory heaven of used and new books. I wandered around a while and got some things I’d been wanting. I wanted to read something set in New York so I looked first at Lawrence Block’s books and got The Burglar in the Closet, which opens with Bernie Rhodenbarr sitting in Gramercy Park, which I’d just passed by on the walk down, and then at Donald E. Westlake and got Get Real, the last of the Dortmunder series, and mostly set in the Lower East Side. Welcome to New York.

While I was standing near a table in the main aisle on the ground floor an older woman carrying some bags passed behind me and accidentally knocked some books to the floor. “Oh, I’m sorry, did I do that?” she said in a thick local accent. A young woman and I both leaned over to pick up the books. I was confused for a moment, because it looked like the cover had ripped, but it hadn’t, the rip was printed. 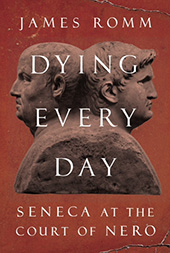 Then I saw what the book was: Dying Every Day: Seneca at the Court of Nero, by James Romm. A new book about Seneca, the Roman senator and Stoic philosopher! Fate had actually put this book in my hand. “It is destined to be,” I thought, and immediately bought it.

It’s a fine book, a gripping history and biography, covering in full something I only knew a tiny bit about. Seneca wrote a good amount of philosophy, including the Epistles, a series of letters full of Stoic advice to a younger friend, but the editions of his philosophy (or his tragedies) don’t go much into the details of Seneca’s life. They might mention he was a senator and advisor to Nero, and rich (as rich as a billionaire today), but then they get on to analyzing the subtleties of his thoughts on nature or equanimity.

Seneca led an incredible life: he was a senator in Rome, he was banished by the emperor Claudius on trumped-up charges of an affair with Caligula’s sister, but was later called back to Rome at the behest of Agrippina, Nero’s mother, to act as an advisor and tutor to the young man. Five years later, Agrippina poisoned Claudius, and Nero became emperor.

Seneca was very close to Nero and stayed as his advisor for years. It worked fairly well at first, but Nero was Nero. This is the main matter of the book: how Seneca, the wise Stoic, stayed close to Nero, who gradually went out of control: wild behaviour, crimes, killings, and eventually the murder of his mother Agrippina. An attempt to kill her on a boat failed, and then:

None of Seneca’s meditations on morality, Virtue, Reason, and the good life could have prepared him for this. Before him, as he entered Nero’s room, stood a frightened and enraged youth of twenty-three, his student and protégé for the past ten years. For the past five, he had allied with the princeps against his dangerous mother. Now the path he had first opened for Nero, by supporting his dalliance with Acte, had led to a botched murder and a political debacle of the first magnitude. It was too late for Seneca to detach himself. The path had to be followed to its end.

Every word Seneca wrote, every treatise he published, must be read against his presence in this room at this moment. He stood in silence for a long time, as though contemplating the choices before him. There were no good ones. When he finally spoke, it was to pass the buck to Burrus. Seneca asked whether Burrus could dispatch his Praetorians to take Agrippina’s life.

It’s impossible to match that, and other things Seneca did, with his Stoic writings, but it was all the same man. It’s a remarkable and paradoxical life.

Romm’s done a great job of writing this history. It’s full of detail (especially drawing on Tacitus), with lots of people and events to follow, but it’s all presented clearly and with a strong narrative. If you liked I, Claudius you’ll like this, and I see similar comments about House of Cards and Game of Thrones.

I especially recommend this to anyone interested in Stoicism. Thrasea Pateus is a minor figure in the book, another senator and also a Stoic, but one who acted like a Stoic should have, by opposing Nero. He was new to me. Seneca’s Stoic nephew Lucan, who wrote the epic poem The Civil War, also appears. He was friends with Nero but later took part in a conspiracy to kill the emperor. It failed, and Lucan had to commit suicide, as did Seneca, who wasn’t part of the plot.

There’s a nice chain of philosophers at the end of the book. After Nero’s death, Thrasea’s Stoic son-in-law Helvidius Priscus returns to Rome, as does the great Stoic Musonius Rufus and Demetrius the Cynic. The emperor Vespasian later banished philosophers from Rome (an action that seems very puzzling these days; I’m not sure what the modern equivalent would be), but for some reason let Musonius Rufus stay. One of his students was Epictetus, who had been a slave belonging to Epaphroditus, who in turn had been Nero’s assistant and had been with him when Nero, on the run, committed suicide—in fact, Epaphroditus helped his master by opening up the cut in his throat.

Later the Stoics were banished from Rome again, and Epictetus went to Greece and taught there. He never wrote anything himself, but one of his students, Arrian, wrote down what he said, which is why we now have the very powerful Discourses. And years later this was read by Marcus Aurelius, the Stoic emperor, a real philosopher king.

For a good introduction to the book, listen to this interview with James Romm on WNYC in late March. It’s just twenty minutes.

← Stuff, Standards and Sites Don't give up your library card number →