I'm absolutely delighted that my paper On Dentographs, A New Method of Visualizing Library Collections has appeared in issue 16 of The Code4Lib Journal.

Gabriel Farrell was my editor. He did a great job and I thank him. We worked in an interesting way, which I described in Managing the draft of a paper as if it were source code. We used Git, and the gitk utility shows who's been committing to a project and how the branches mix and merge. Here's what the paper looked like over the last month: 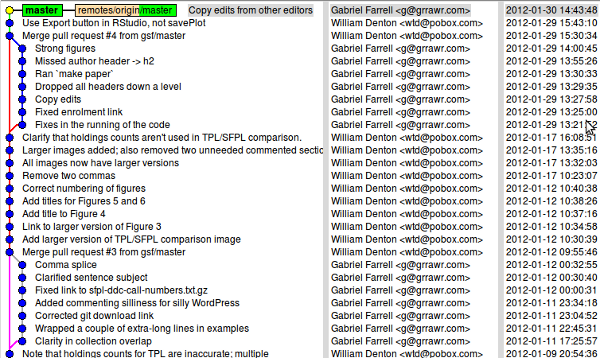 You can see how Gabriel did a bunch of work on it, then I made a bunch of changes in response to suggestions and questions he had, then he made more changes, and there was one last fix from each of us. It was a great way to collaborate, and the paper is much better for his work and that of the other editors.