I got something nice in the mail last week: a bright yellow certificate for $5 off my next purchase at Book City, the four-store Toronto bookstore chain.

I got it because I have a Book City loyalty card. It costs $20, and gets me 10% off every book I buy there plus an extra 10% off all new hardcovers, plus $5 on my birthday (I lied to them about when it is, of course), and $5 for every $300 I spend there. My fake birthday just arrived and I got this nice present.

I don’t remember the first time I bought a book at Book City, but as soon as I moved to Toronto in 1985, I started buying books there. There used to be a lot of bookstores in Toronto, of course. There were all the used bookstores on Harbord and Queen West, which are all gone now (though Bakka is on Harbord, as are two or three other stores selling new books). There was the Reader’s Den on Bloor, where I worked from 1990–1993 when it went bankrupt in the recession. (After that I interviewed at Book City, but didn’t get hired. No hard feelings.) There was a store in Yorkville whose name I forget. There was Lichtman’s. There was Britnell’s. All gone.

They’re all gone because of Chapters and Indigo, which began as two separate monster bookstore chains but merged in 2001. They almost entirely crushed all competition across Canada and then expanded into the apparently more profitable arena of candles, photo albums and smugness.

And of course they’re all gone because of Amazon.

I used to buy a lot of books on Amazon. It’s so easy: any book you might possibly want is listed, and when you’re looking at one it suggests all sorts of others you might like, and it’s probably right. Press a couple of buttons and in two days the books are in your mailbox. You can go from “I think I might like this book” to “I want this book” to “SEND ME THIS BOOK NOW” in a few seconds.

In March 2014 I was walking along Bloor Street West late one night and passed the Book City store that I’d been shopping at for thirty years. It was closed down! I was completely surprised and utterly appalled. 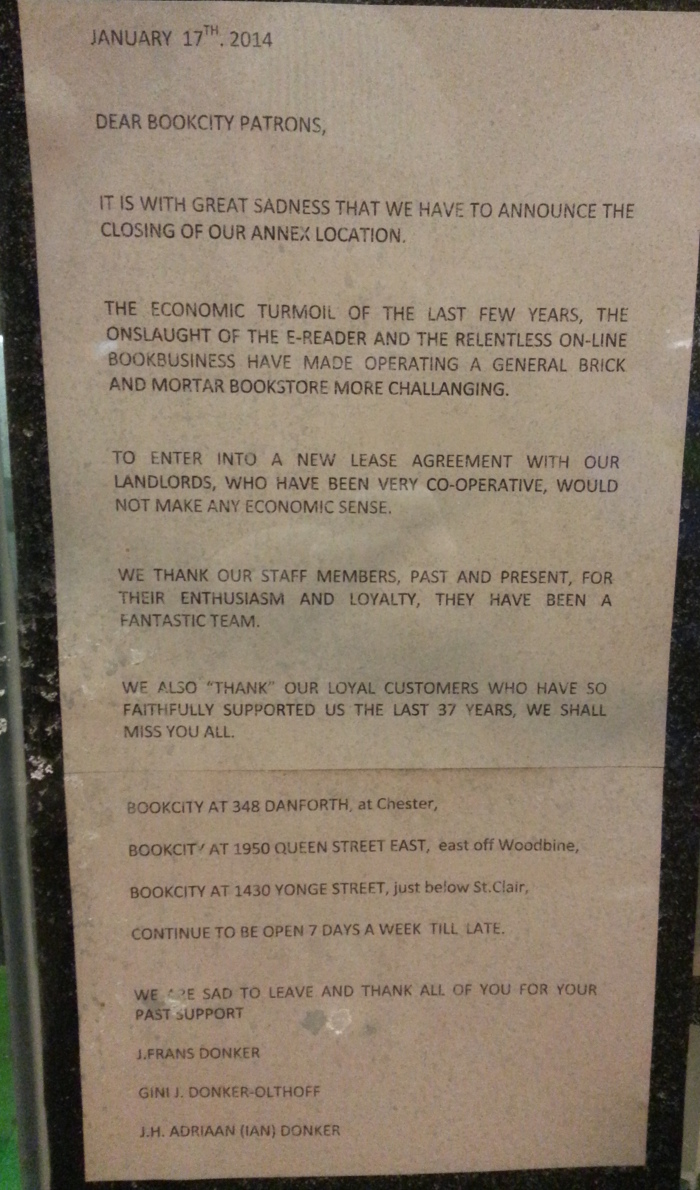 That was the last straw. I’d been meaning to change my habits, but that was it. I decided that night I wouldn’t buy from Amazon again. I haven’t.

I’d been meaning to change my habits because of the early 2014 news about how terribly Amazon treated its workers. Salon’s Worse than Wal-Mart: Amazon’s sick brutality and secret history of ruthlessly intimidating workers lays it out.

Perhaps the biggest scandal in Amazon’s recent history took place at its Allentown, Pennsylvania, center during the summer of 2011. The scandal was the subject of a prizewinning series in the Allentown newspaper, the Morning Call, by its reporter Spencer Soper. The series revealed the lengths Amazon was prepared to go to keep costs down and output high and yielded a singular image of Amazon’s ruthlessness—ambulances stationed on hot days at the Amazon center to take employees suffering from heat stroke to the hospital. Despite the summer weather, there was no air-conditioning in the depot, and Amazon refused to let fresh air circulate by opening loading doors at either end of the depot—for fear of theft. Inside the plant there was no slackening of the pace, even as temperatures rose to more than 100 degrees.

Seeing a Book City branch close down made it very local and very real. By using Amazon I was supporting a bad company and I was putting a friendly local bookstore out of business.

And they are friendly. I started emailing my local Book City branch: “There’s a book I’d like to get—do you have it?” “The new Terry Pratchett is coming out next month. Please set one aside and let me know when it’s in.” A couple of times a month, I email them. The next day Chris or Phil or Alison replies and says, “We have that, and I put it behind the counter for you,” or, “I’ve put in an order for it,” or “It won’t be out for three months but when it comes in we’ll let you know right away.” If they have the book now, I go over and get it. If I have to wait, I know they’re reliable, and sure enough, the book arrives, they email me, and I go get it.

I’m in the store every couple of weeks, picking something up or just looking around. A couple of times I’ve done impromptu reader’s advisory for customers. Sometimes I chat with the clerks. (Other times I listen to them, and remember back when I worked in a bookstore, and had the same belief that no customer in the store could hear what I was saying to my fellow clerk.) They know me now, and if there’s a book on hold for me, when I go the counter, they’ve pulled it out and it’s ready for me. 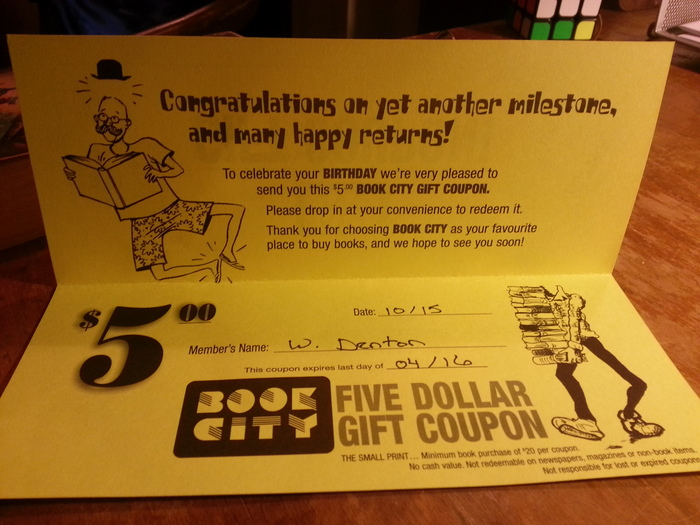 In August there was another long investigate piece about Amazon’s work practices, this one in the New York Times: Inside Amazon: Wrestling Big Ideas in a Bruising Workplace. It got a lot of discussion going, including among friends.

It didn’t change my behaviour, though. I’d already changed. I told people about how I’d moved to Book City and encouraged them to do the same. A few days later, like usual, I emailed Book City to say I needed a book, and they said they’d get it, and they did.

I don’t need books delivered to my door through the oppressive machinations of an internet billionaire. I’m happy to walk a little ways and get them from real people in a real Toronto bookstore.