← In Fear We Trust 2 Counting and aggregating in R →

In Fear We Trust 1

Saturday night to Sunday morning I'm going to be part of a Nuit Blanche happening at the Arts and Letters Club. Andrew Sookrah is running a show called "In Fear We Trust," a fourteen-minute multimedia performance with dancers, music, video (projected on the dancers) and cereal boxes. It'll be performed about 18 times through the night, from sunset to sunrise. 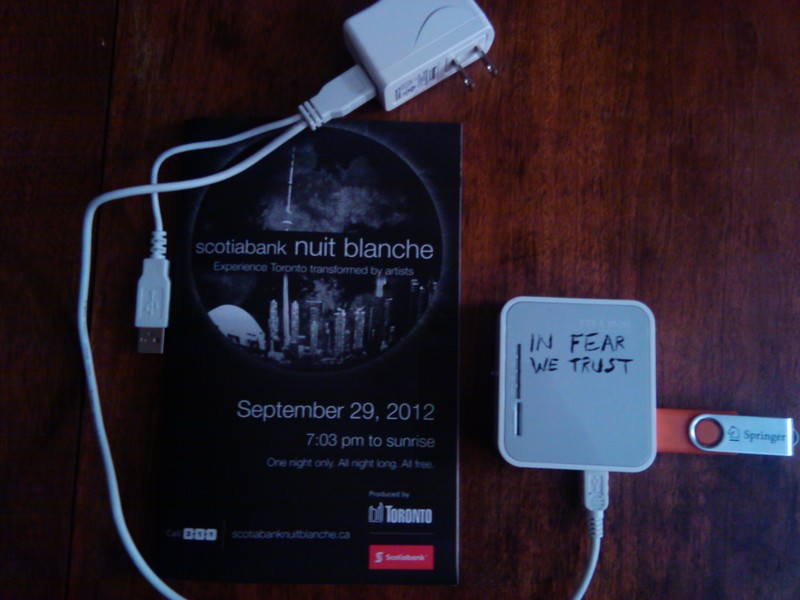 My part of it is running a one-night-only Nuit-Blanche-specific temporary semi-autonomous wifi network called InFearWeTrust. It will only be accessible at the club that night. I'm running it on a TP-Link MR-3020 router with a hacked version of Jason Griffey's LibraryBox. We'll be feeding out music, video, pictures, drawings, schematics, ambient audio recordings and anything else we have at hand. If you're at the club you can connect to that wifi network and get stuff that's not on the open web. Come the dawn, the network will disappear, never to reappear.

I'll post more about later. If you're in Toronto and out for Nuit Blanche this Saturday night, come by. I haven't seen a full rehearsal yet but from what I know it's going to be good. If you're on Twitter, use #snbto and #infearwetrust, and if you CC license a photo I'll add it to the network.

← In Fear We Trust 2 Counting and aggregating in R →