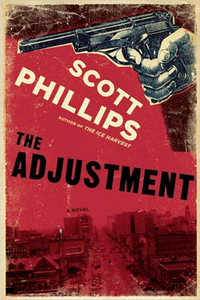 Last October I posted about Rut, a dystopian SF novel by Scott Phillips, published by Concord Free Press in an unusual arrangement where they give away the book but you donate money somewhere in exchange, and then pass the book along to someone else.

Now Phillips is back with The Adjustment, published in hardback the old-fashioned way. It fits in with The Walkaway (2002) and his other Wichita novels, but it also stands alone perfectly well as a tight, fast-moving noir. It's very good.

Blithe psychopath Wayne Ogden is out of the Army and back in Wichita, Kansas just after World War II. He's got a job as minder and fixer for a rich, powerful, debauched local businessman. This review in the Los Angeles Times gives a good summary of the story, and gets the atmosphere of the book well: "What draws us to the book is Phillips' taut and vicious vision, so clean we cannot help but inhabit it, even when we find ourselves repelled."

There's a hilarious filthy bit on page 98 that I won't quote, but here's another quote that'll give you a sense of the book.

He was about my age and looked to be in sound health. "Let me ask you something, buddy. You in the war?"

He looked at me in the rear view mirror like I was either kidding or crazy. "Hell, no. I never had a worse time in my damn life than in the lousy goddamn Navy. There's a petty officer I came pretty damn close to killing. If I thought there was any chance of getting away with a murder on a United States aircraft carrier I by God would have done it, too, no regrets."

I almost laughed; there was the Navy for you. An Army man would have figured out a way, and a Marine would have just killed the son of a bitch and damn the consequences.

[Updated 29 August with a link to Open Library.]