← VuFind usage fives times that of "classic catalogue" After Launching Search and Discovery, Who Is Mission Control? →

This year Nuit Blanche began in Toronto at sunset on 2 October and continued through the night to dawn on 3 October. There were art exhibits, installations, and events open all over downtown.

My two favourites were “Reunion,” staged in the Ryerson University Theatre, and “Eric Satie’s Vexations (1893),” in Brookfield Place.

“Reunion” is built around a famous chess game played at Ryerson in 1968 between Marcel Duchamp and John Cage. Here’s the description of “Reunion,” copied from the Nuit Blanche web site, which doesn’t have archives:

In 1968, a Festival of Art and Technology titled Sightsoundsystems was directed by Udo Kasemets and jointly presented by the Isaacs Gallery and Ryerson Polytechnical Institute. The festival was launched with a collaborative performance titled Reunion held at the Ryerson Theatre on the evening of Tuesday 5 March and featuring John Cage, Marcel Duchamp, and Teeny Duchamp, with electronic music by David Behrman, Gordon Mumma, David Tudor, and Lowell Cross. In the performance, games of chess determined the form and acoustical ambience of the event. A sound-distributing chessboard designed and built by Lowell Cross created sound in response to the various moves made by the players (a series of photoelectric cells underneath each square of the chessboard were used as triggers). Except for a brief curtain call in Buffalo, NY five days later, Duchamp made his last public stage appearance in Reunion on the Ryerson Theatre stage.

Reunion 2010 invites a number of local and international participants influenced by the twin legacies of Cage and Duchamp to create a new 12-hour performance for the same stage. The event celebrates this historic artistic convergence that is both a local piece of Toronto lore as well as an art historical event of international consequence.

Events went on all night. I saw one part of it. 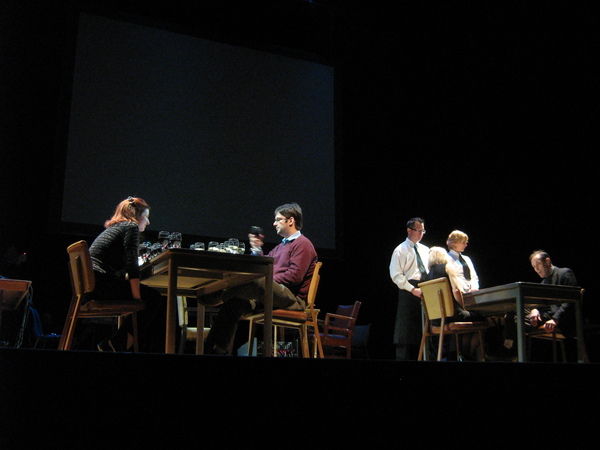 In this picture, on the left Jennifer Shahade and Pascal Charbonneau are performing “Wine Chess” by Takako_Saito. All of her pieces were glasses of red wine, and his pieces were white wine. They could tell them apart only by the bouquet and taste. (And, to be sure, their memories, because chess players that good don’t need the pieces.)

On the right, performing Saito’s “Canape Chess,” are William Anastasi and Dove Bradshaw. Their chessboard began with no pieces. When they moved a piece for the first time, a canape would be put down to represent it. When the piece was taken, the canape could be eaten. Behind them, a musician played a prepared harp.

I sat watching “Reunion” for about half an hour, starting around midnight. This is what it sounded like (8.3 MB MP3).

Written in 1893, Erik Satie’s Vexations was never published nor publicly heard during his lifetime. He left 39 beats of hand scrawled, insidiously vexing music—hard to read and hard to remember—and the following cryptic instruction: “to repeat 840 times this motif, it is advisable to prepare oneself in the most absolute silence, by some serious immobilities.” A number of performers (most notably John Cage) have ventured to take him at his word and successively play the piece 840 times, taking between 15 and 27 hours to do so. We only have 12 hours so we’re dividing it: two pianos playing simultaneously, 420 passes per piano. Our Vexations is staged in the majestic arched expanse of a cathedral of commerce, perhaps therefore taking part in a highly irregular sort of exchange. We’ll be counting; tonight, by playing 840 scores—each a vexation—once. After each score is played it is transformed into a folded paper sculpture—840 scores creating 840 objects—giving shape to the sound and echoing the team of pianists weaving the composition’s unmonumental but resolutely vexing notes. Satie said: “Before I compose a piece, I walk around it several times, accompanied by myself.” We invite you to walk around Vexations, hopefully several times as it accumulates through the night.

Martin Arnold and Micah Lexier are both based in Toronto. Arnold’s compositions are performed nationally and internationally. Lexier is a visual artist, a collector, and (sometimes) a curator. Arnold is active in Toronto’s improvisation and experimental jazz/roots/rock communities performing on live electronics, banjo, melodica, and hurdy-gurdy. Lexier has a deep interest in measurement, numbers and the kinds of marks we make in our day-to-day lives. Arnold teaches at Trent University. Together their ages equal 99 years. 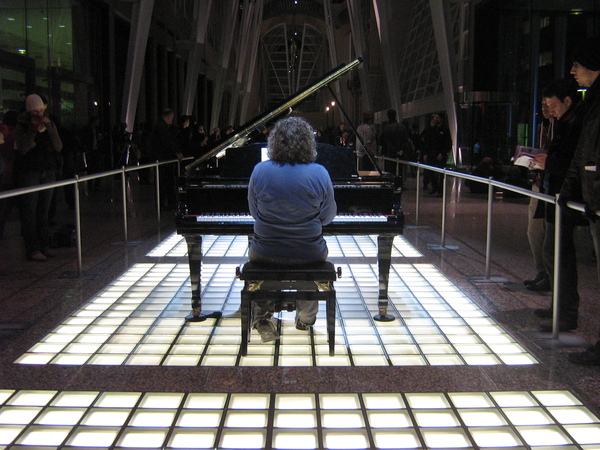 That’s one of the two pianists performing “Vexations” when I was there. I stood by her for a while, then moved into the middle of the long space between the two.

A little ways away two people folded the scores that had been played and set them out on a very long table. 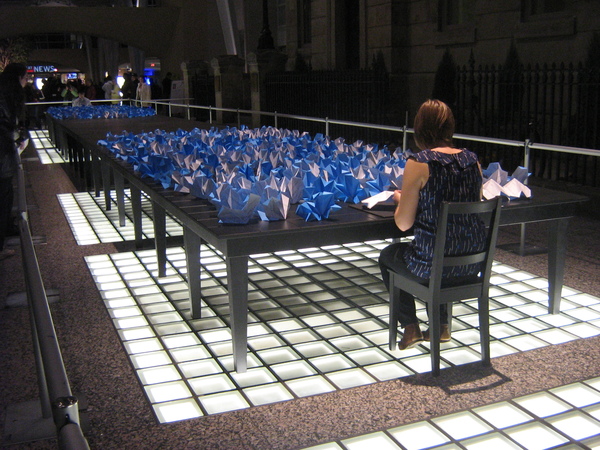 Both pieces were beautiful.

← VuFind usage fives times that of "classic catalogue" After Launching Search and Discovery, Who Is Mission Control? →