How I put Ubuntu Netbook-Remix on my Eee 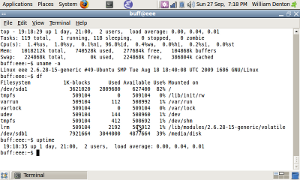 I have an Asus Eee 701. They keyboard's too small but it's a nice netbook and perfect for travelling. I had Ubuntu Eee (now Easy Peasy) on it, but a couple of days ago I brought it up to date with Ubuntu Netbook-Remix, with Ubuntu 9.04. Here's what I did.

I just noticed that the Eee has about 220 megs of swap space. It shouldn't have any, because all that writing will speed up the flash drive wearing out and losing its memory. Hmm, maybe I'll have to reinstall.